From the Edges of Empire:

Convict Women from beyond the British Isles

From the Edges of Empire, the fifth book to be published by the highly successful Tasmanian 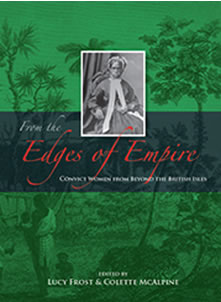 This book tells the remarkable stories of women transported to Australia from the British Isles.

These stirring accounts remind us that the colonies were, from their beginning, populated by people from many cultures, and encourage us to envision the  long reach of the British justice system during the heyday of Empire.

From the Edges of Empire includes 15 stories from 14 authors, from family historians to award-winning historians. Some of these include Alison Alexander, winner of the National Biography Award for her book on Jane Franklin; Cassandra Pybus, author of 11 books; and Ralph Crane who has written or edited 21 books.

1.  Out of India:  Convict women in the web of Empire

5.  Convicts from the Cape Colony

8.  A homicide in the Hondura; The Grace of a Mistress; A slave's reprieve-how a teenage slave avoided the gallows in Belize

Part 3:  Europeans and the High Seas

10. Where, Oh Where, is Eugenie Lemaire

by Colette McAlpine and Margaret Lindley

by Susan Ballyn and Lucy Frost